Kanye West routinely shared pornographic photos and videos of ex-wife Kim Kardashian with Yeezy and Adidas employees in an attempt to intimidate them, an explosive report has claimed.

It alleges that a young male who was interviewing for a job at Yeezy was shown an ‘intimate’ image of Kardashian by West just after it arrived on his phone, while an ‘explicit’ video of the reality star was shown to several co-workers

A number of damning claims in the report published by Rolling Stone say that West culminated a ‘sexualized’ atmosphere in which pornography was a constant feature, and often made explicit remarks to female Yeezy and Adidas staffers. 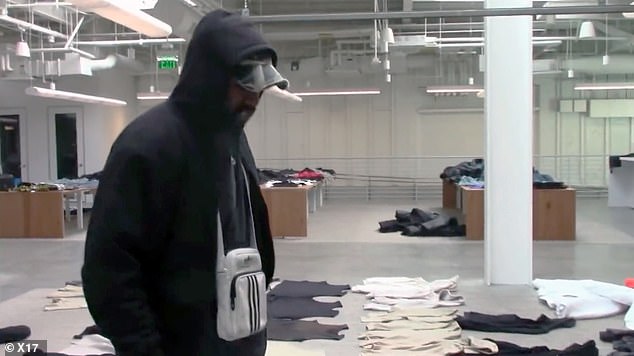 Kanye West appears in a video in a workspace filled with clothing from his designer collaborations, posted this week

Yeezy was a multi-billion-dollar fashion collaboration between West and Adidas which was terminated in October following a number of public anti-semantic rants from the musician.

The open letter was sent by former Yeezy employees to Adidas executives on Tuesday, accusing West of cultivating a ‘toxic and chaotic’ work environment, as well as ‘a very sick pattern of predacious behavior toward women,’ Rolling Stone reported.

Former Yeezy president Pete Fox told Rolling Stone: ‘Steve Jobs or Elon Musk … they were responsible to shareholders; Kanye 100 percent owns his brands – he can do whatever he wants, and we’re just there to serve at his pleasure.’

‘From age five till now, having to kick the habit and it just presents itself in the open like it’s OK and I stand up and say, ‘No, it’s not OK’.’

How much is Kanye really worth?

Forbes estimate that Kanye is worth around $2billion, with DailyMail.com breaking down his individual deals:

West’s deal with Adidas was the crowning jewel of his fortune, with sales climbing to $1.7billion in 2020 – earning him $191 million in royalties.

Forbes estimates that the Yeezy business with Adidas is worth $1.5billion, and the company confirmed that they were likely to lose up to $250million of their net income in 2022 as a result of the split.

His GAP collection was estimated at around $970million when the deal was announced in 2021, but he has since terminated his work with the retailer.

Initial products sold out in 2021, after being announced in June 2020, in a partnership which was expected to last for ten years but was cut short by West.

GAP were also part of a deal between Yeezy and Balenciaga, with estimates claiming they would bring in $1billion in projected sales.

West, who divorced Kim Kardashian in 2020, remains a partner in Skims but it is unclear how much he earns from that.

He previously ranted about owning 5 percent of the business, which is estimated at a $3.2billion net worth.

If that is the case then he would have a $160million stake in the company.

He has sold over 140 million albums worldwide, and documents seen by Forbes show that his own recorded music and publishing rights is worth at least $90million.

Between mortgages, advances and other liabilities, Forbes say West owes about $100 million.

In the 30-minute long video, the rapper meets with Adidas executives whose faces are blurred out.

West could be seen meeting in a plain room surrounded by men on stools, apparently wearing Adidas sneakers, as he shows them something on his phone.

Soon, the executive tries to swipe Kanye’s hand away and tells him to ‘come on.’

Following the termination of his Yeezy partnership, West could lose his billionaire status after also being dropped by a number of other partners, including Gap and Balenciaga.

His deal with Adidas was worth around $1.5 billion a year, netting the star around $220 million annually.

He claimed last month to have lost a masssive $2 billion in a single day after companies began to sever ties with him following his racist remarks made online.

Discussing the backlash, West insisted that ‘money is not who I am’ as he penned a ‘love letter’ to Hollywood super agent Ari Emanuel, who had called for West to be dropped by all major brands.

In a post captioned ‘LOVE SPEECH’, he penned: ‘Ari Emanuel, I lost 2 billion dollars in one day and I’m still alive. This is love speech. I still love you. God still loves you. The money is not who I am. The people is who I am.’

In an op-ed for the Financial Times, Endeavor co-CEO Emanuel wrote that there should be ‘no tolerance anywhere for West’s anti-Semitism’ and encouraged brands to fully cease partnering and working with the designer.

‘Apple and Spotify, which host West’s music, whoever organizes West’s tours, and Adidas, which collaborates with West on his fashion line, should all stop working with him,’ wrote Emanuel – essentially calling for a blacklisting.

Earlier this week, after having his Twitter account reinstated following a ban for his anti-semantic remarks, West announced he would be selling leftover Yeezy, Balenciaga and Adidas clothes for $20, ‘so everyone can afford quality clothes.’

In footage posted online, West appears almost joyful as he stands in a workspace that looks to be the host of an upcoming sample sale.