Freedman’s Favorites is brought to you by No House Advantage, where you can bet on player Over/Under props legally in over 30 US states! Play in PICK ‘EM contests against other people for BIG CASH PRIZES or test your skills VS. THE HOUSE to win up to 21x your bet! Sign up now and receive a first deposit match up to $50 with promo code PROS2022.

People generally prefer for sports analysts to stick to sports … but here’s the thing: I’m serious about food. I think of eating as a sport.

And in my book that makes Thanksgiving the Olympics.

So we’re firmly in the world of sports, and at FantasyPros  we’re all about them rankings — so here are my official pie rankings for the Thanksgiving of 2022, ordered from worst to first.

How is this even a pie? Just the very idea of this is disgusting. If you want to put actual meat in a pie, fine — but then make sure it’s a chicken pot pie or something similar and definitely don’t act as if it’s a dessert.

So close to being pumpkin pie or sweet potato pie … but it’s not.

Custard is bad enough on its own.

Fantastic, except for the oranges. This just feels like a waste of good oranges and good pie crust.

These can be listed in any order … because they’re all the same pie. I won’t be convinced otherwise.

Good for cleansing the palate between servings of heartier (aka “real”) pies.

Looks sort of like key lime pie, but isn’t.

These all seem sort of the same. They’re not triplets, but maybe they’re siblings?

No. 10: Any Berry Pie That Isn’t Blueberry or Strawberry Pie

I don’t think this really requires any comment or analysis, aside from this Seinfeld clip.

Great with strawberry ice cream and whipped cream for the Fourth of July and every other day of the year.

Best if consumed with milk.

My go-to dessert in high school.

There are so many varieties of apple pie, and they’re all good.

My other go-to dessert in high school.

Not the kind you buy at the store. Made at home with pecans from Texas, bourbon from Kentucky, and a recipe from Louisiana.

Any day of the year other than Thanksgiving, and this might be No. 1.

There’s a difference between pumpkin pie and sweet potato pie — but I can’t really taste difference. Pie is pie.

I hope you enjoy yours this Thanksgiving.

Check out the rest of our weekly fantasy football advice >>

Here are my Week 12 favorites. These are the players who (in some combination) …

I’ll update this piece by Saturday night with notes based on the week’s injury reports and news items. Before then, follow our NFL news desk for information on any breaking news. After the update, any changing opinions I have will be reflected in my personal Week 11 rankings, not this article.

Note: All fantasy points are half-PPR scoring unless otherwise stated. Players are ordered within position roughly (but probably not precisely) according to my rankings.

Odds are as of Tuesday, Nov. 22, and from our BettingPros matchups page, where you can see the percentage distributions of spread, over/under and moneyline bets tracked in the BettingPros App.

Check out our DFS lineup optimizer, which is just one of our many FantasyPros DFS tools.

You can guess how many points Smith will score in the Week 12 No House Advantage Over/Under Challenge.

.@Connor_J_Hughes: “Do you feel like you let the defense down at all?”

Tony Pollard has gone OVER his Rushing Yards Prop Line in five consecutive games, per the @BettingPros Prop Bet Analyzer.

In four of those games, he’s gone over by at least 33.5 yards. pic.twitter.com/ovizcmV9bV

Check out my Week 12 early betting preview on Dolphins vs. Texans.

Check out my Week 12 early betting preview on Lions vs. Bills.

He has officially entered the Jerome Bettis phase of his career.

Davante Adams in his last 3 games: 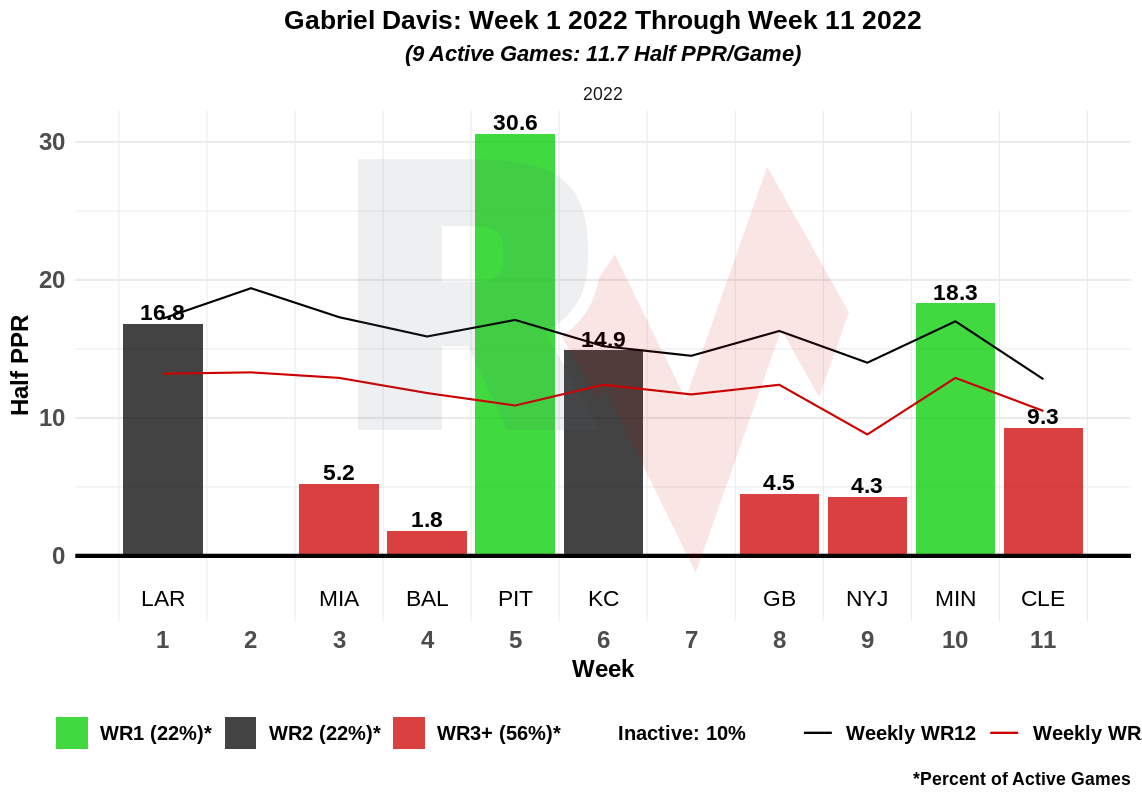 Are there five TE’s that you’d rather roster? Kelce/Andrews… Hockenson, probably. Idk beyond that.

If you want to dive deeper into fantasy football, check out our award-winning slate of Fantasy Football Tools as you navigate your season. From our Start/Sit Assistant – which provides your optimal lineup based on accurate consensus projections – to our Waiver Wire Assistant, which allows you to quickly see which available players will improve your team and how much – we’ve got you covered this fantasy football season.